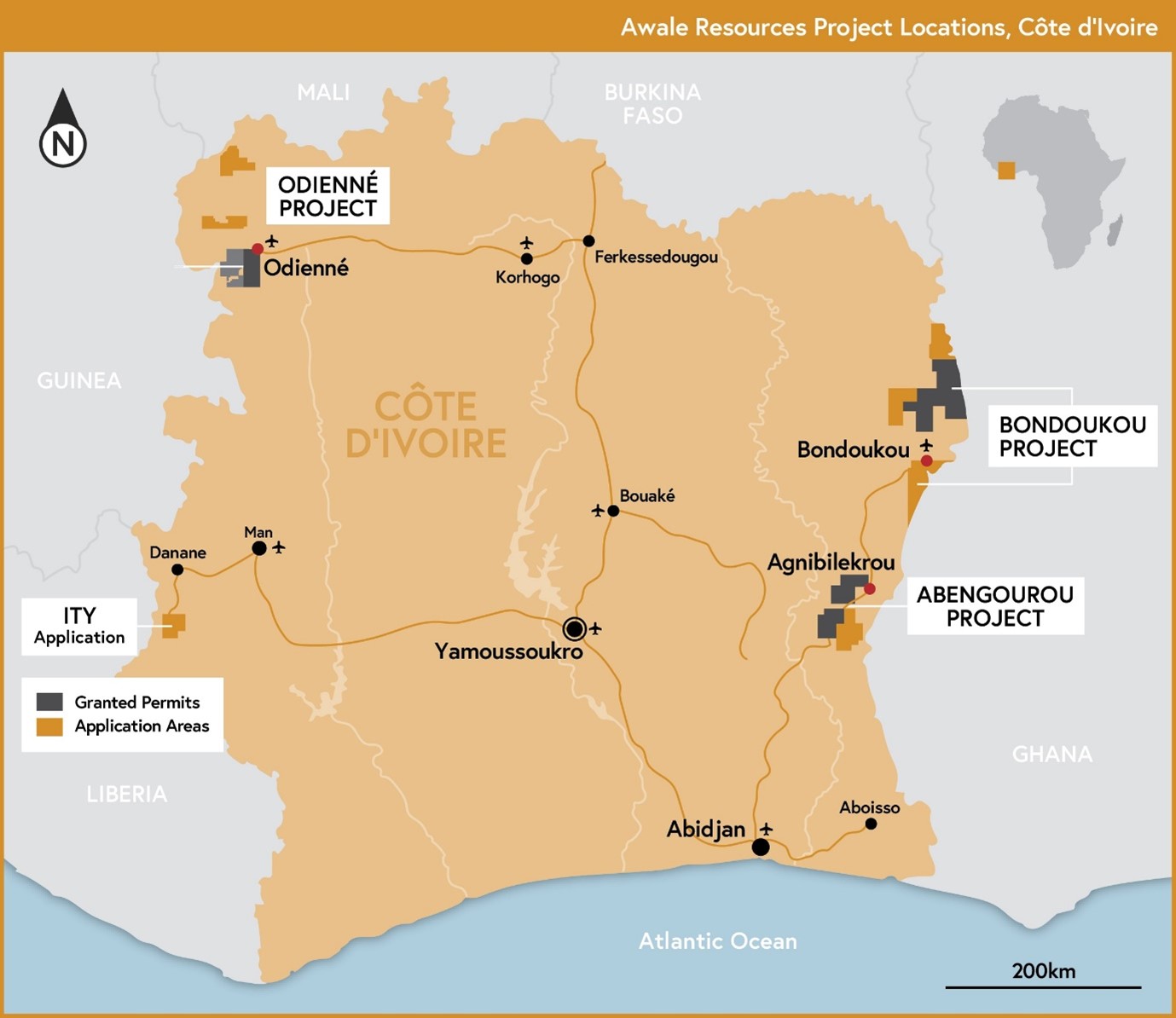 The Bondoukou project lies at the southern extents and confluence of the Boromo greenstone belt from Burkina Faso and the Bolgatanga and Wa Lawra belts from Ghana (Figure 2). To the south of the project area is the western extension of the Bui belt from Ghana. The Bui Belt is noted for the occurrence of Tarkwaian sediments which host the Damang and Tarkwa deposits. These greenstone belts have proven gold mineralisation; the Boromo Belt in Burkina Faso hosts the Centamin Konkera resource (3.3 Moz a 1.7 g/t) and the Cluff Resources Poura mine (c. 1.5 Moz of historic production at 13.5 g/t Au). The Wa Lawra Belt hosts Azumah Resources Kunche and Bepkong deposits (1 Moz at 1.5 g/t Au), while the Bolgatanga Belt hosts the Youga and Namdini deposits held by MNG Gold and Castle Resources, recently Centamin has reported an inferred resource of 5.3MOz at 1.13 g/t Au at the Doropo camp c.100km north of the Bondoukou Project. 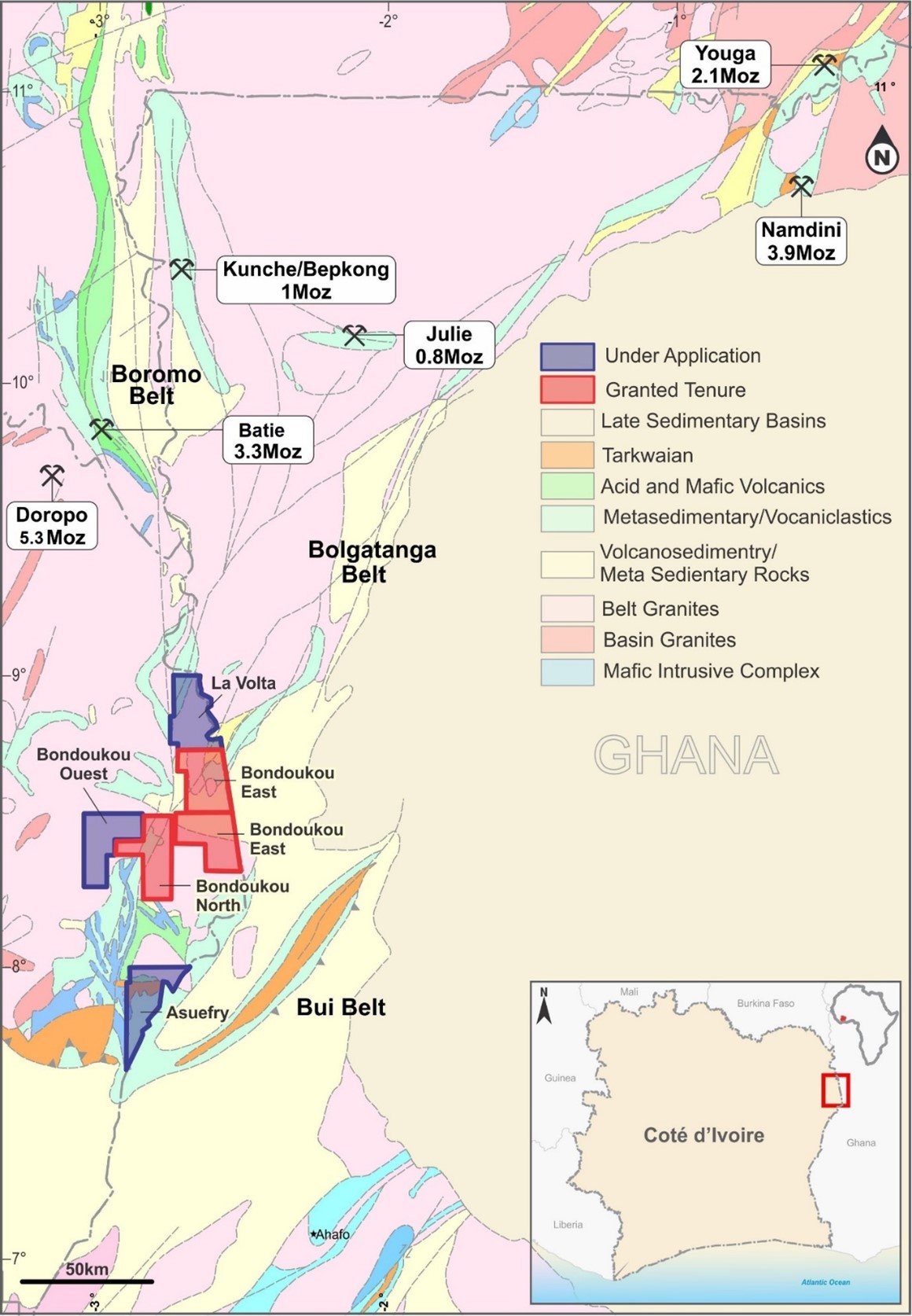 The project area consists of over 80km of highly prospective gold bearing structures which Awale has been systematically exploring. The project area has been covered with detailed aerial magnetic and radiometric surveys, BLEG stream sampling, soil geochemistry, auger drilling, RC drilling and Diamond drilling. This work has led to significant trench and drill intercepts on the Awari Shear (Fako Targets) and Samanda Trend (Samanda East) (Figure 3). There are several significant artisanal mining zones which also follow these trends – The Fako prospect is one of these. 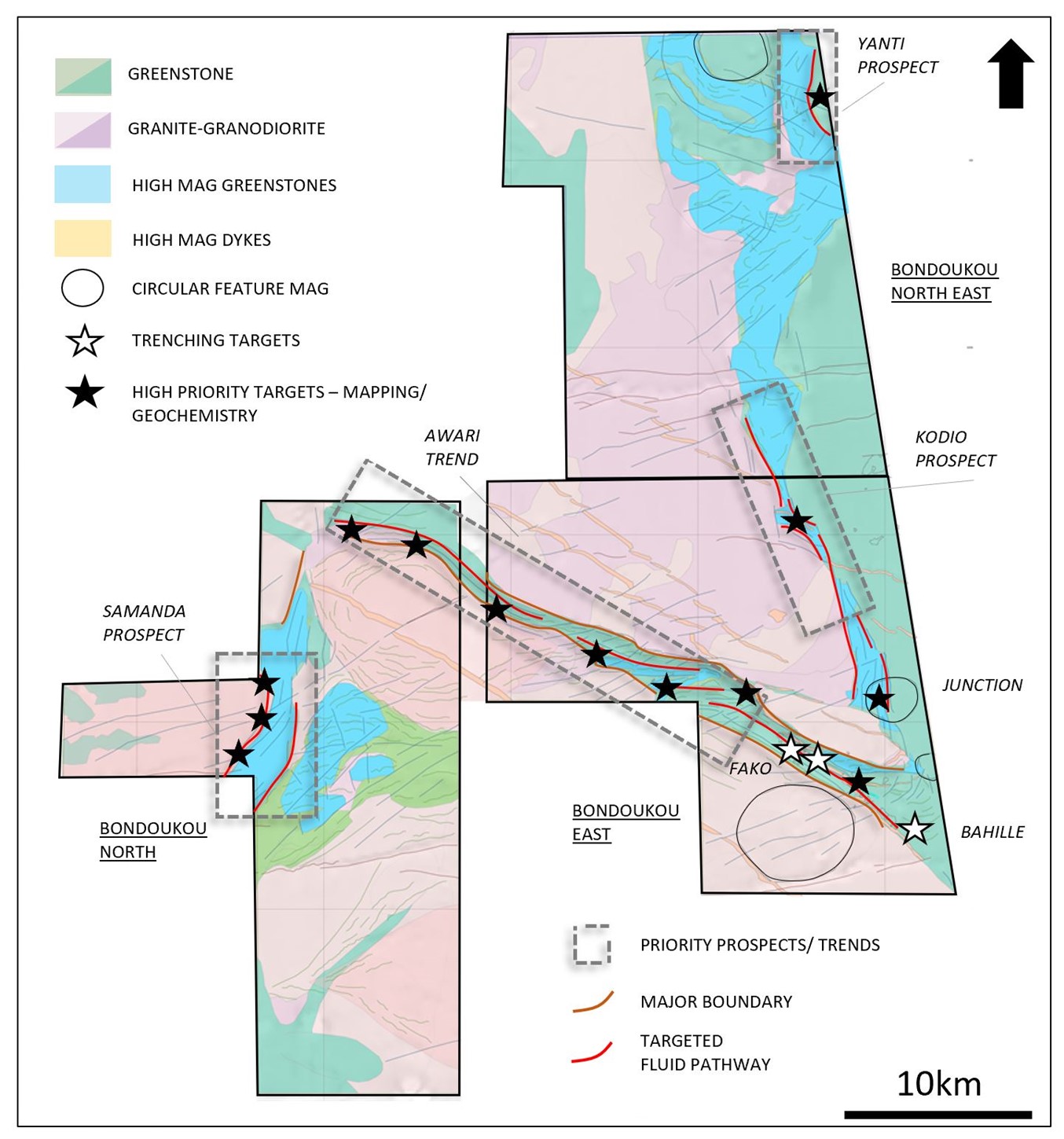 The Fako prospect is a 6 km trend that lies on the WNW trending Awari shear, 3 zones have been drill tested or trenched or both – Locality A, Locality B and Fako South. Each of these zones have anomalous results (highlights above) which are coincident with significant >100ppb auger anomalies there are a further 4 >100ppb anomalies to be tested or 6 if the zone is extended over 10km to Bahilé (Figure 4). This entire 10 km trend is characterised by the same alteration system consisting of fuchsite/sericite/silica and sulphide.

The Fako Mineralisation is hosted within a sequence of sheared ultramafic to andesitic volcanic and volcanicalstic rocks that have been intruded by late felsic to intermediate dykes. These greenschist facies rocks abut a granite/gneiss terrane that forms a footwall to mineralization. Quartz carbonate veining hosts higher grade mineralisation within a broader disseminated style withing the shear. Alteration is Fuchsite, carbonate silica sericite dominated. Figure 5 is a plan map showing some of the better Fako mineralisation. 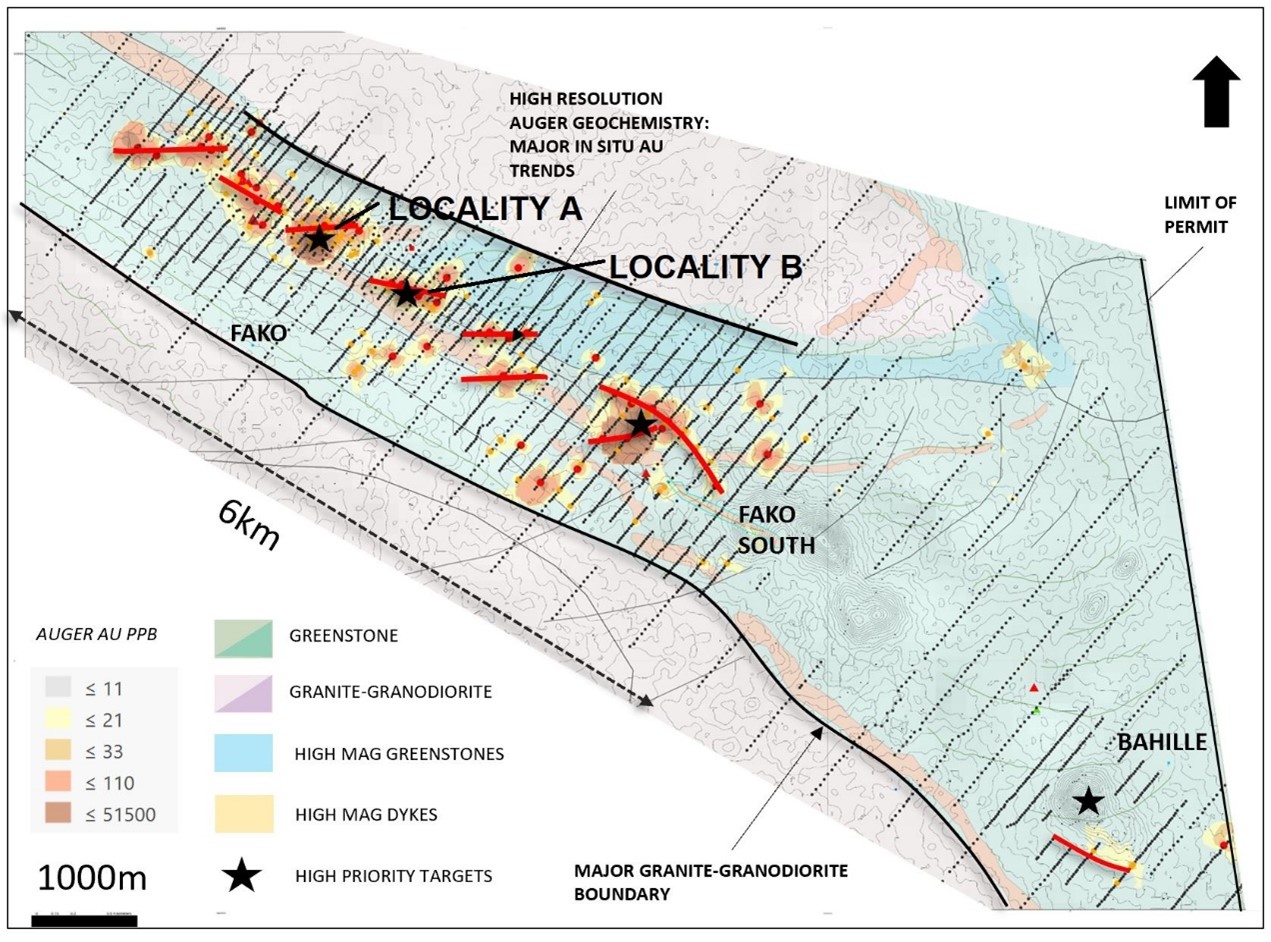 The Samanda Trend contains the highest order bleg stream anomalism in the Bondoukou Project, this is also reflected in the high order soil geochemistry for the area (figure 6). 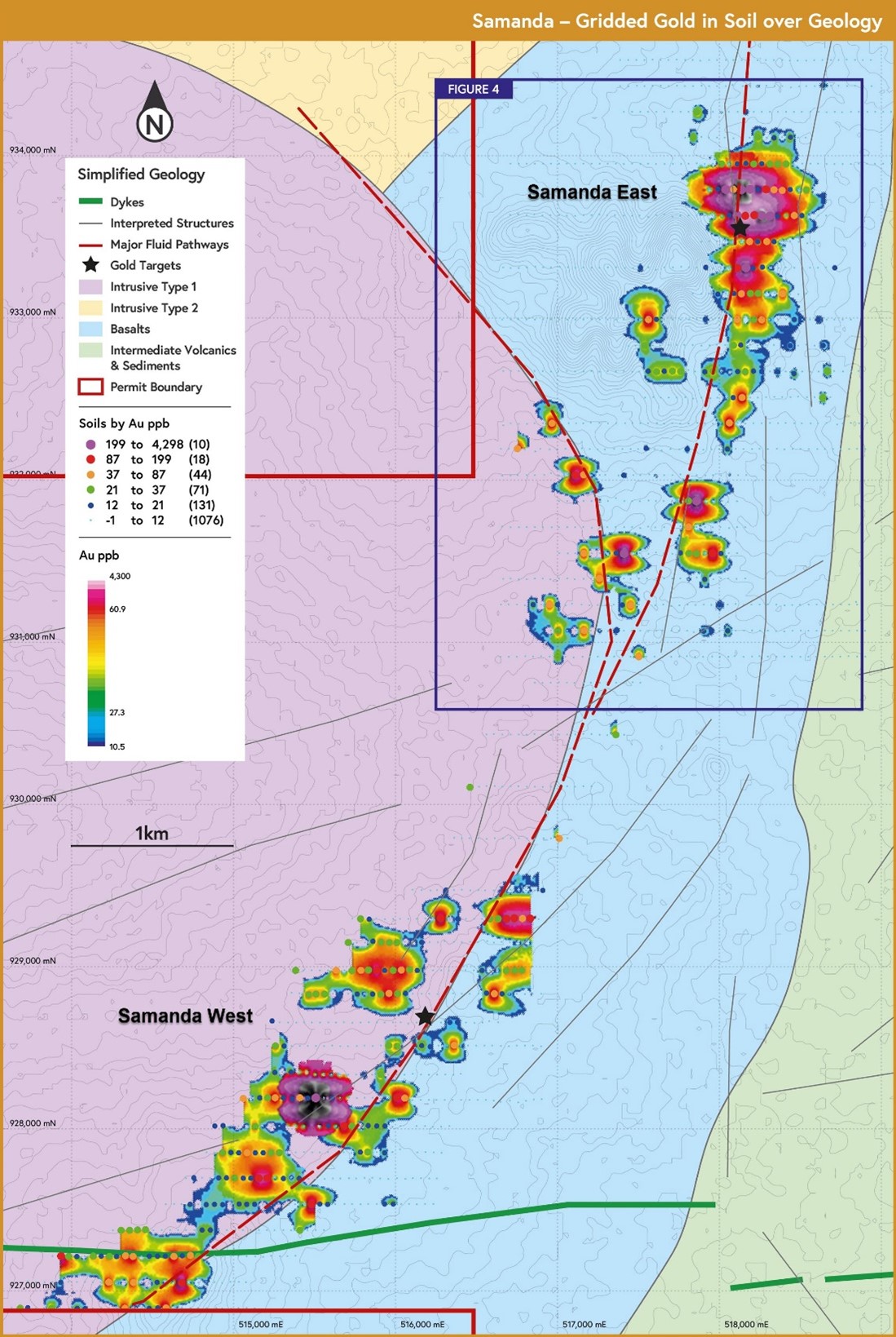 Awale completed 8 scout drill holes over 2 drill section at the Samada east anomaly in 2021 (figure 7). All holes intercepted mineralisation and silica/pyrite/sericite alteration with the best hole being:

Mineralization intercepted these holes drilled at Samada East is related to a NNE trending shear zone which exploits the contact between basalts to the west and a package of intermediate volcanic and-sedimentary rocks to the east. This sheared contact has been intruded by a granodiorite which has acted as a brittle host to mineralization. Moving forward the company will define the margins of the intrusion and target ‘shadow zones’ for high grade and broader mineralization. Mineralization intercepted in these holes is traceable over 200m and is open in all directions. Alteration in and peripheral to mineralization consists of silica/sericite and carbonate alteration with up to 3% sulphide. 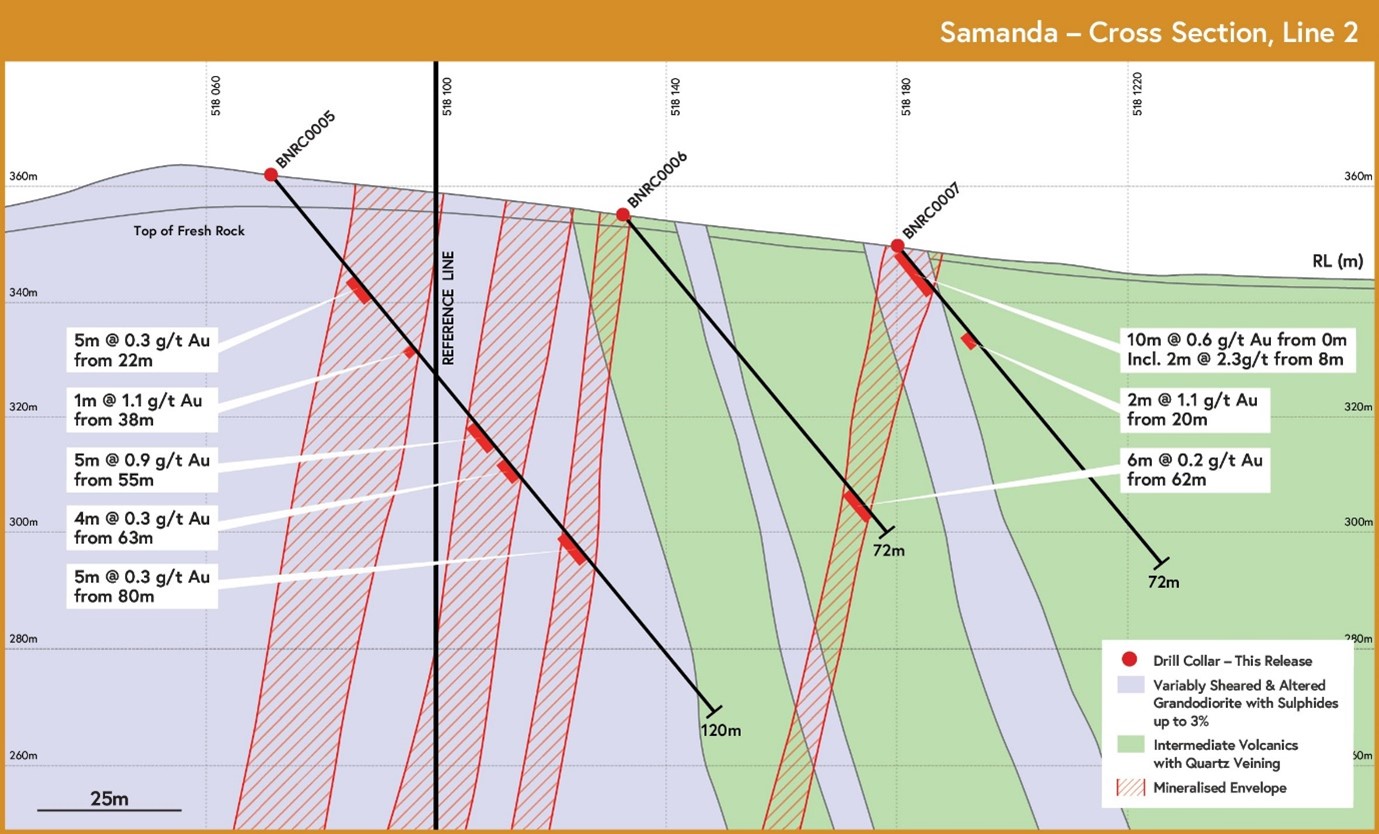