The greater Odienné project lies in the northwest Denguèlé Region of Côte d’Ivoire, close to the borders of Mali and Guinea. The project covers approximately 1600 square kilometres in 4 permits: being the granted ‘Odienné East’ permit, and three permits under application (Figure 1).

Since discovery of high-grade gold at Empire main and Iron Oxide Copper Gold (IOCG) style mineralization at the Charger and Sceptre targets, the Odienné Project now forms a primary focus for the company. Awalé is confident the geological setting of the Odienné district to be comparable to that of other significant Iron Oxide Copper Gold (IOCG) provinces globally. IOCG deposits are significant contributors to global copper and gold inventories, and the Company considers the Odienné Project to contain significant potential for the discovery of the first major IOCG deposit in west Africa.

Two of the permits (Odienné East and Odienné Ouest, figure 2) are now under Joint Venture with Newmont Ventures Inc, a wholly owned subsidiary of the Newmont Corporation (“Newmont”) (See NR Dated NR_31st May 2022).

Under the agreement, Newmont can earn up to 75% of the permits through exploration expenditure totalling $US15 million. Awalé’s vision and the commitment from Newmont underscores the potential for discovery of a ‘Tier 1’ asset on the Odienné Project. 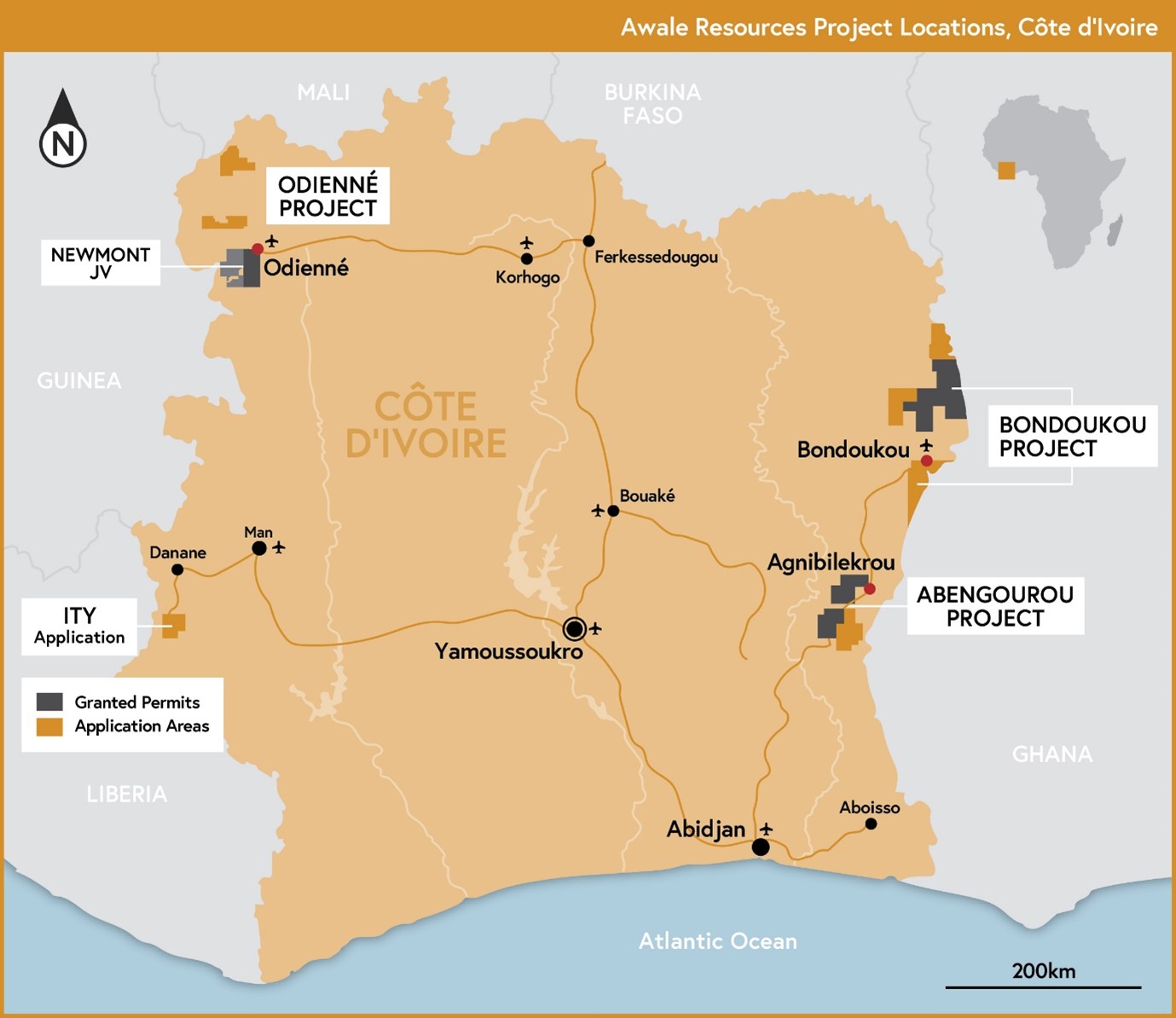 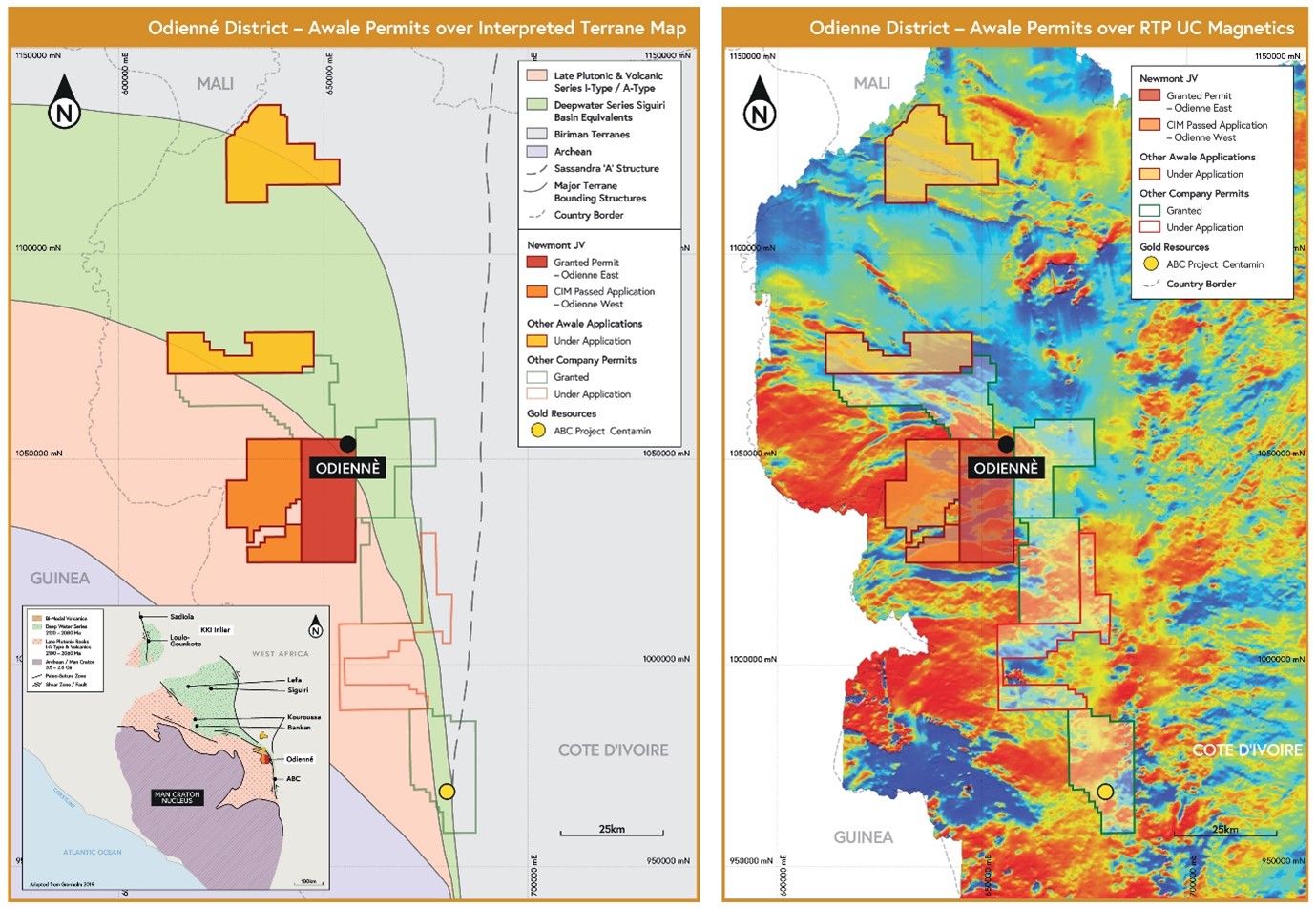 Recently Awalé has recognised the significance of the crustal setting of the Odienné Project and associated Cu-Au mineralization that characterises the district. As such the company has adopted an Iron Oxide Copper Gold (IOCG) model for further exploration. Current targets for this style of mineralization are the Sceptre and Charger Prospects (figure 4 and 5) Sceptre is a significant 5 km long high tenor Cu-Au IOCG geochemical target (See News Release dated NR_Jan_13_2022), while at Charger the company intercepted high grade gold with copper within hematite breccias in RC and Diamond drilling, which included 3m at 9 grams per tonne Au (“g/t”), 89.6 g/t Silver (“Ag”) and 0.7% Cu - within Broader zone of 27m at 13 g/t Ag in hole OERC-89. 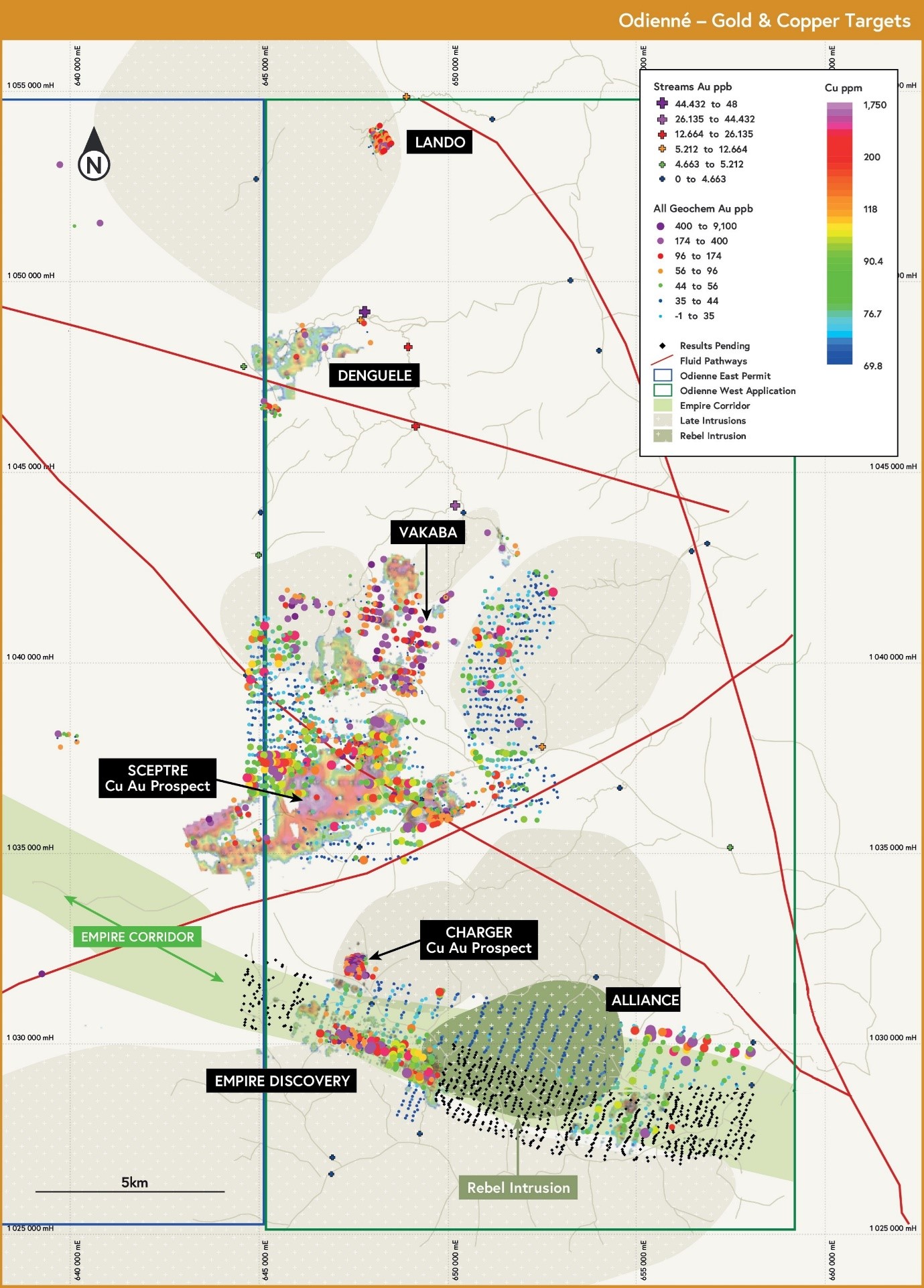 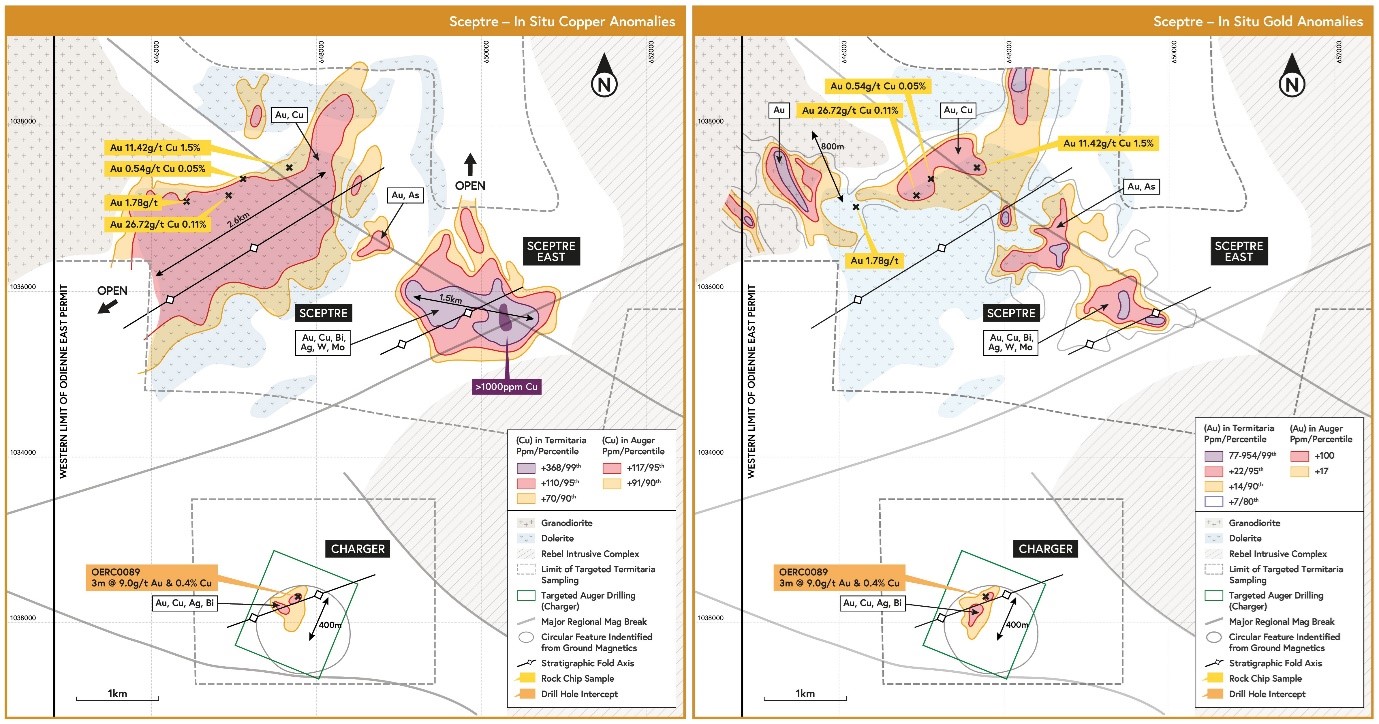 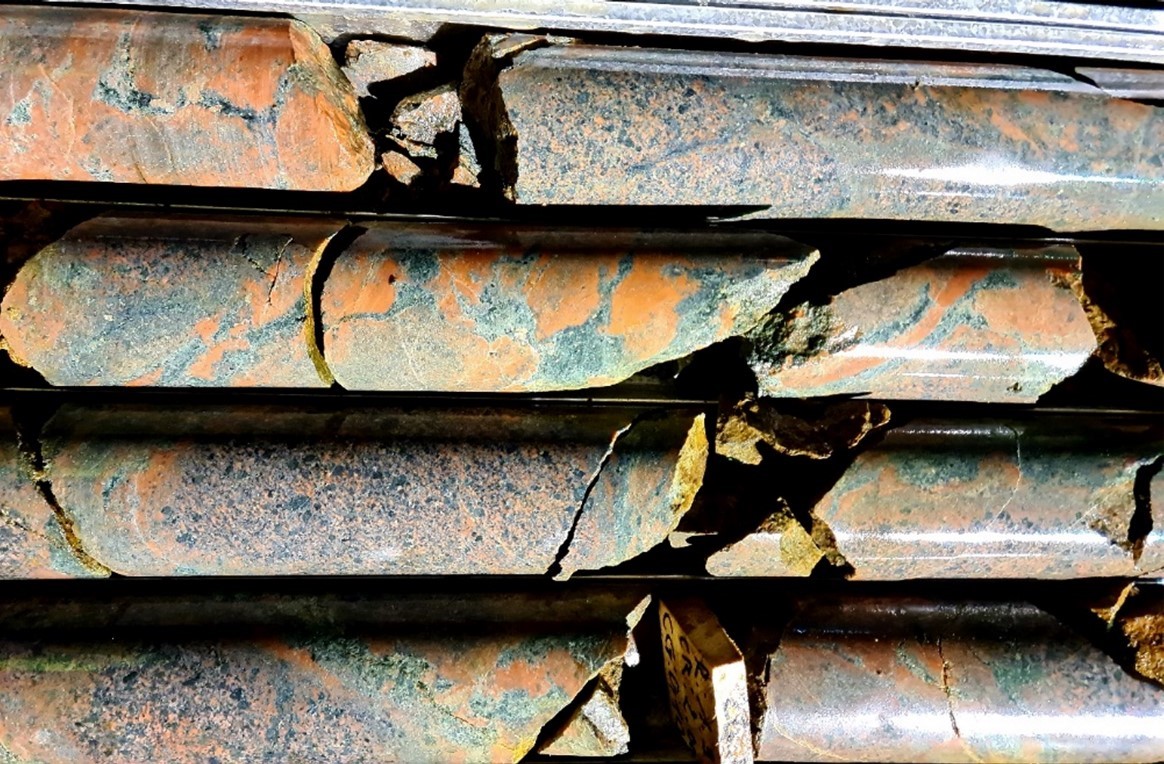 The Odienné project area has been subject to previous first pass exploration in the mid 1990’s via a joint venture between SODEMI and Randgold Resources. The JV completed broad-spaced, shallow soil sampling for gold and base metals over the greater portion of the project area and followed up with pitting and trenching.  After Awale resources commenced its own systematic exploration works and incorporating the Randgold Resources legacy data Awale has recognised the significance of the crustal setting of the Odienné project. The crustal setting of Odienné on a significant Archean-Proterozoic margin along with the soil/termitaria data from the Sceptre prospect. and the initial drill results from the adjacent Charger prospect, the Company interprets the geological setting of the Odienné district to be comparable to that of other significant Iron Oxide Copper Gold (IOCG) provinces globally. IOCG deposits are significant contributors to global copper and gold inventories, and the Company considers the Odienné project to contain significant potential for the discovery of the first major IOCG deposit in west Africa.

Precambrian IOCG provinces globally (e.g. Olympic Dam- Gawler Craton, Australia and Carajás - Amazonian Craton, Brazil) are significant global sources of copper and gold, and are characterized by their association with iron-oxides such as hematite and magnetite. These IOCG deposits formed during brief episodes of extension that postdated accretion of Paleoproterozoic terranes onto an Archean craton nucleus. Figure 6 depicts the crustal setting of both the Odienne and Carajás provinces. 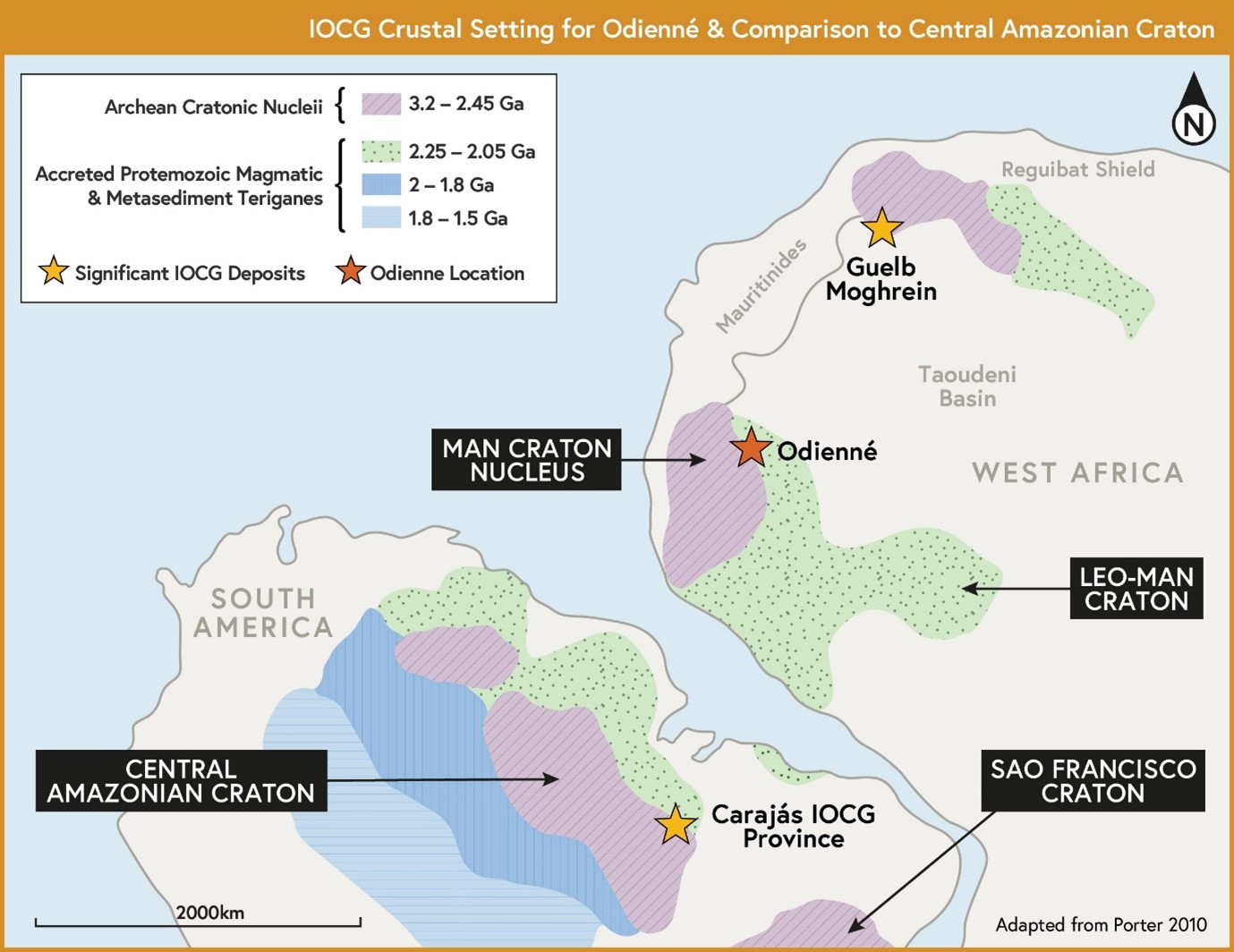 Five kilometres to the south of the Sceptre and other Cu-Au Targets, the Empire Gold Discovery is a high-grade gold target located on the 20km long Empire structural corridor (Figures 7 and 8). Selected significant intercepts for the Empire Main discovery include (but are not limited to) the following:

See Releases Dated NR_March_10_2021, NR_Feb_1_2021 and NR_Dec. 15 2020 for a full list of significant intercepts and a summary of Empire Main and the Empire extension drilling at Empire East. 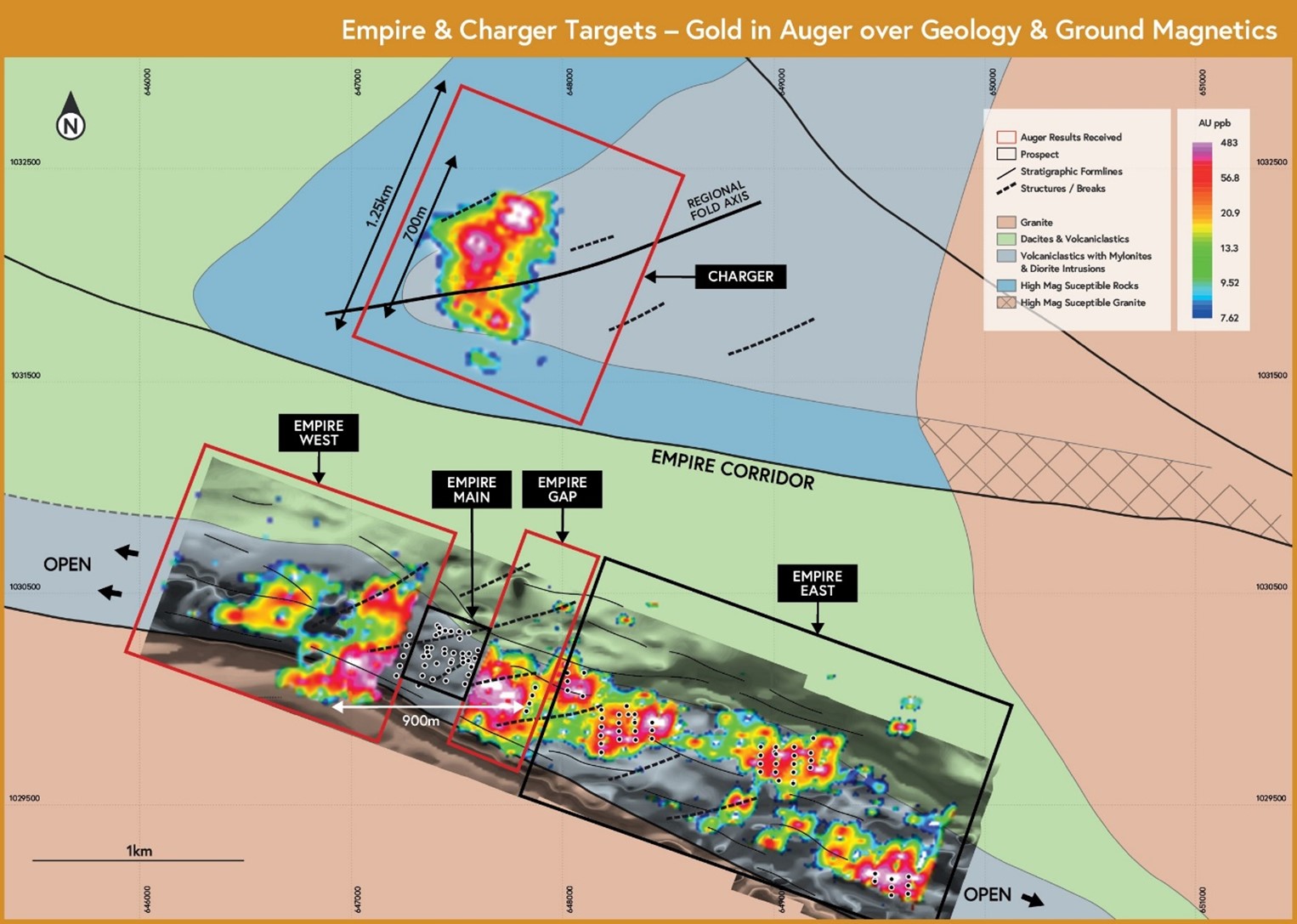 Figure 7: the 5 km section of the 20km Long Empire Corridor, and Charger Prospect 2.5km to the North 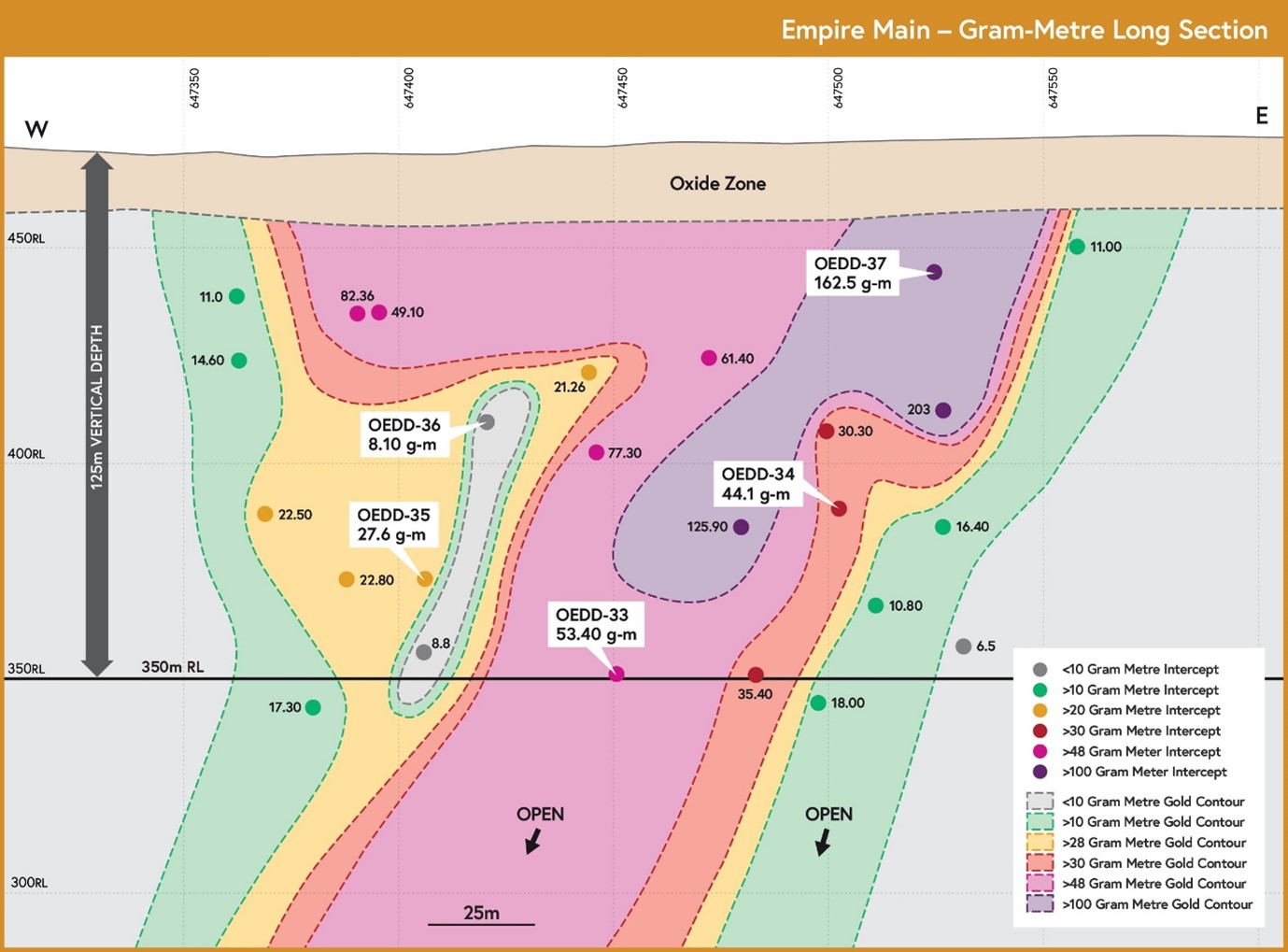 Background on the Empire gold discovery

High-grade mineralization is hosted in brittle/ductile quartz vein arrays that are oriented from east-west to northeast and exhibit both shallow and steep plunges.  The host diorite lies within a > 20 kilometre long and 1 to 2 kilometre wide brittle/ductile shear zone, named the ‘Empire Corridor’. Mineralization at the Empire Main discovery remains open along strike and down dip/plunge. Beyond the Empire Main discovery there is high potential for discovery or similar or larger deposits along this fertile structural corridor.

Empire was discovered through systematic exploration by Awalé, resulting in a coincident geology, gold/arsenic geochemistry, and ground geophysics (Induced Polarization, or “IP”) anomaly. This discovery demonstrates high grade gold bearing fluid flow within the empire corridor, and the company plans to continue exploring along this fertile shear zone to make new discoveries.

This is an extra long project name

This is an extra long project name