Colossal is a private company with an exciting gold exploration portfolio focused on the highly prospective and underexplored, greenstone belts of Suriname (Figure 1), South America. Colossal holds, through its wholly owned Surinamese subsidiary, Consolidated Gold Resources N.V. (“Consolidated Gold” or “CGR”), a 100% interest in 4 mineral exploration and 1 exploitation licences in Suriname (“the Project”).

Note: The Acquisition although binding is still subject to Closing conditions being receipt of TSX Venture Exchange acceptance and receipt of the approval of the shareholders of the Company; as well as other closing conditions detailed in the news release. 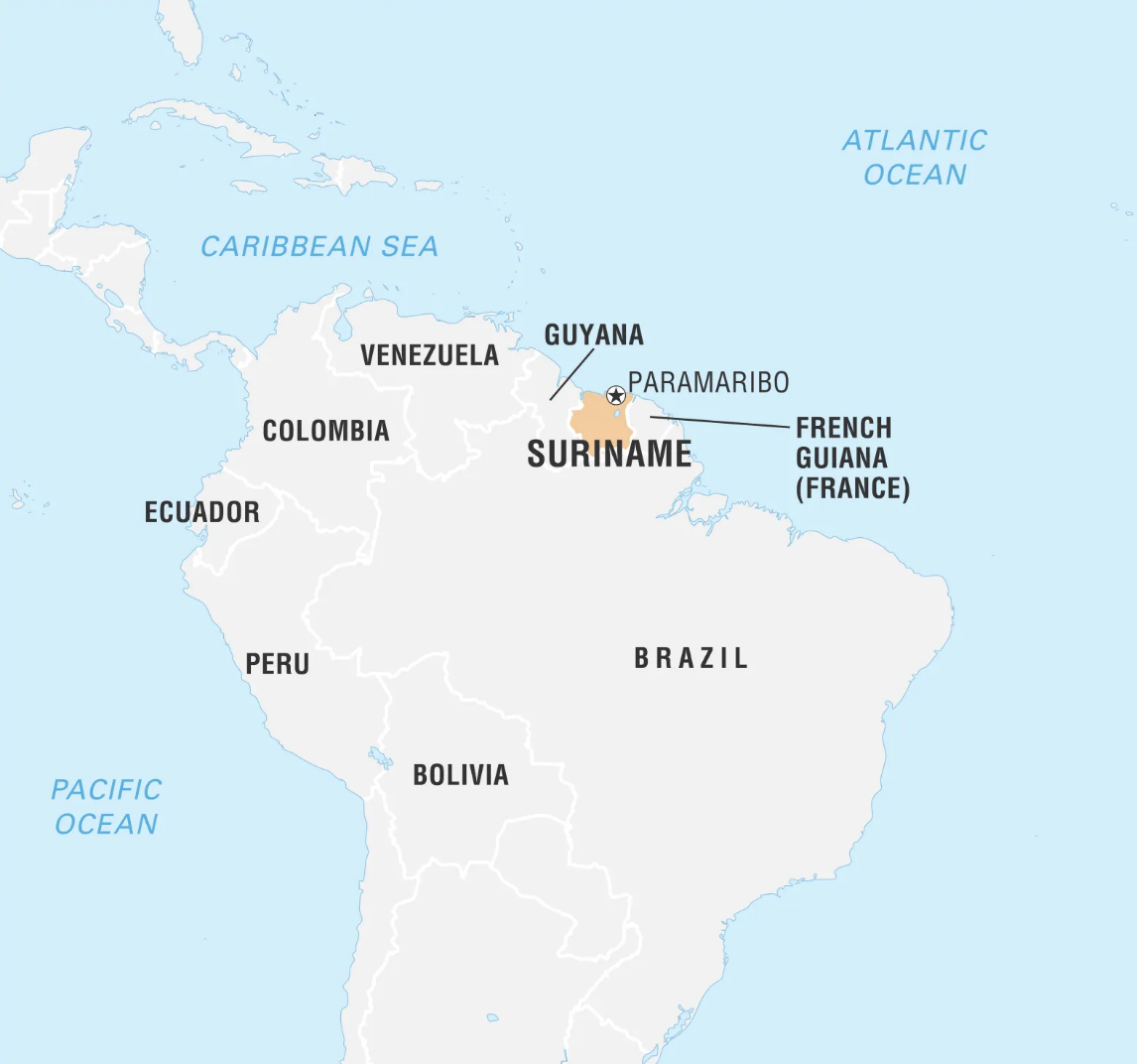 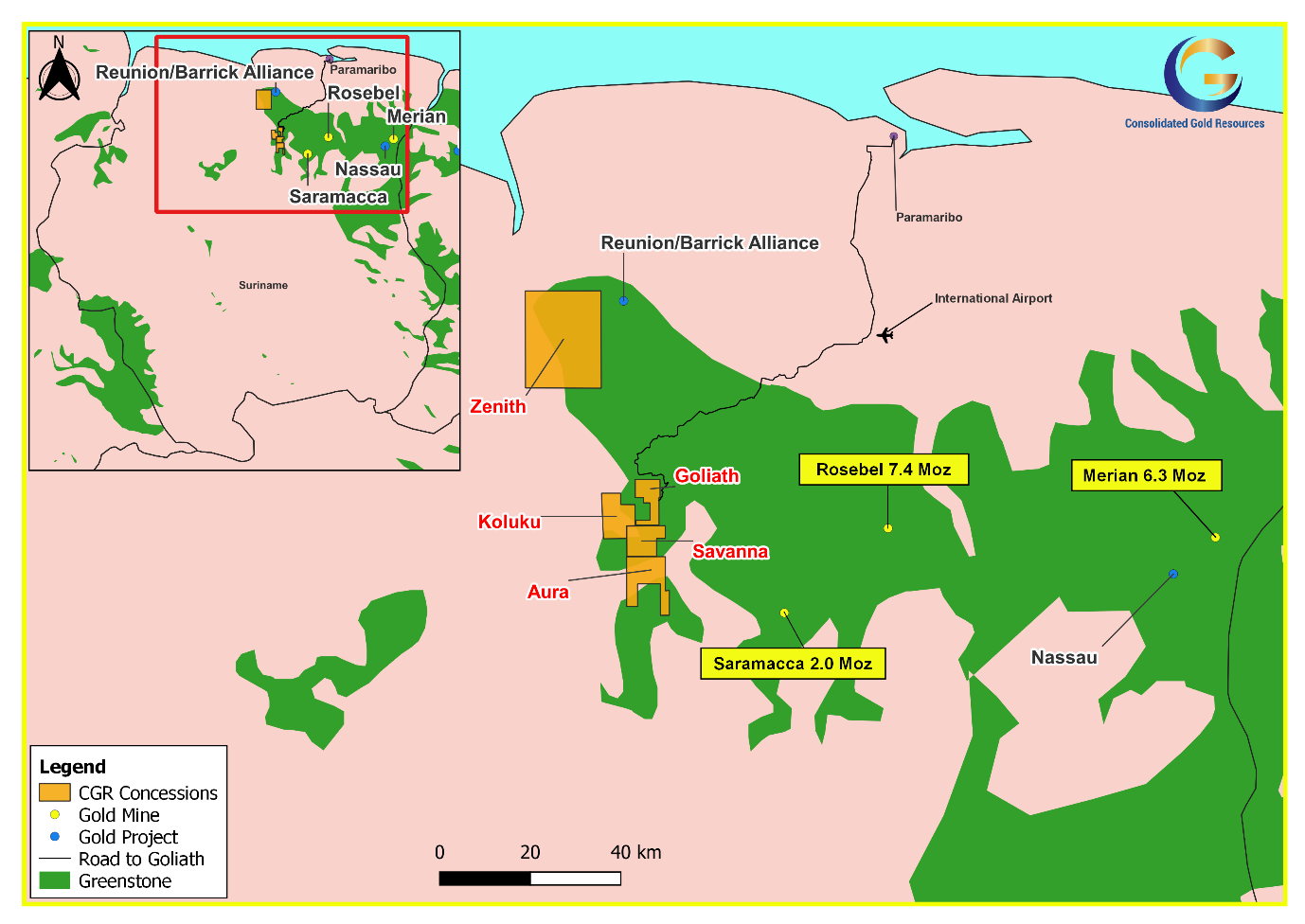 The Guiana Shield (Figure 3) forms the northern part of the Amazon Craton that was amalgamated during the Trans‐Amazonian tectono‐thermal event from 2.1 to 1.8 Ga. Broadly, the Guiana Shield is composed of Paleoproterozoic granitoid‐greenstone terranes in the east and north, sedimentary and volcanic rocks in the southwest, with sporadically distributed zones of Paleoproterozoic and Archean high grade metamorphic rocks. Greenstone belts in the northern and eastern parts of the Guiana Shield include the Marowijne Supergroup in French Guiana and Suriname. 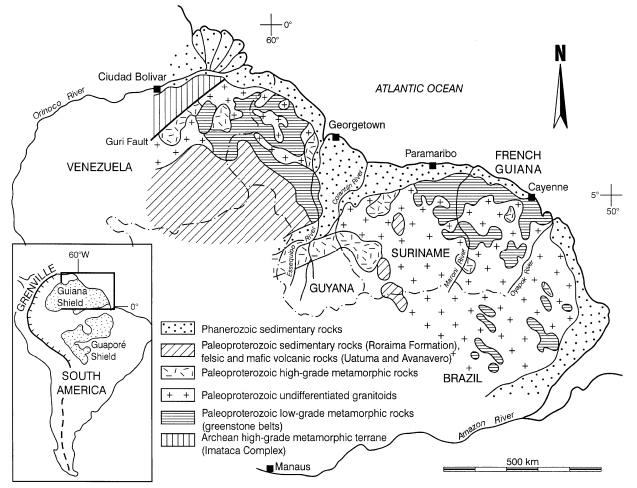 The Guiana Shield is underexplored in comparison to the West African Man Shield, with a  gold endowment of less than half that of its west African sister which is considered to be of the same geology prior to formation of the Southern Atlantic Ocean during the breakup of the Gondwana supercontinent c.140 million years ago. This gap leaves significant potential for more major discoveries in the Guiana Shield and Awalé is now strategically positioned on this highly prospective greenstone belt which lies along trend from known mineralisation on the Iamgold projects (Figure 4 and 5). The licences also contain extensive artisanal workings. 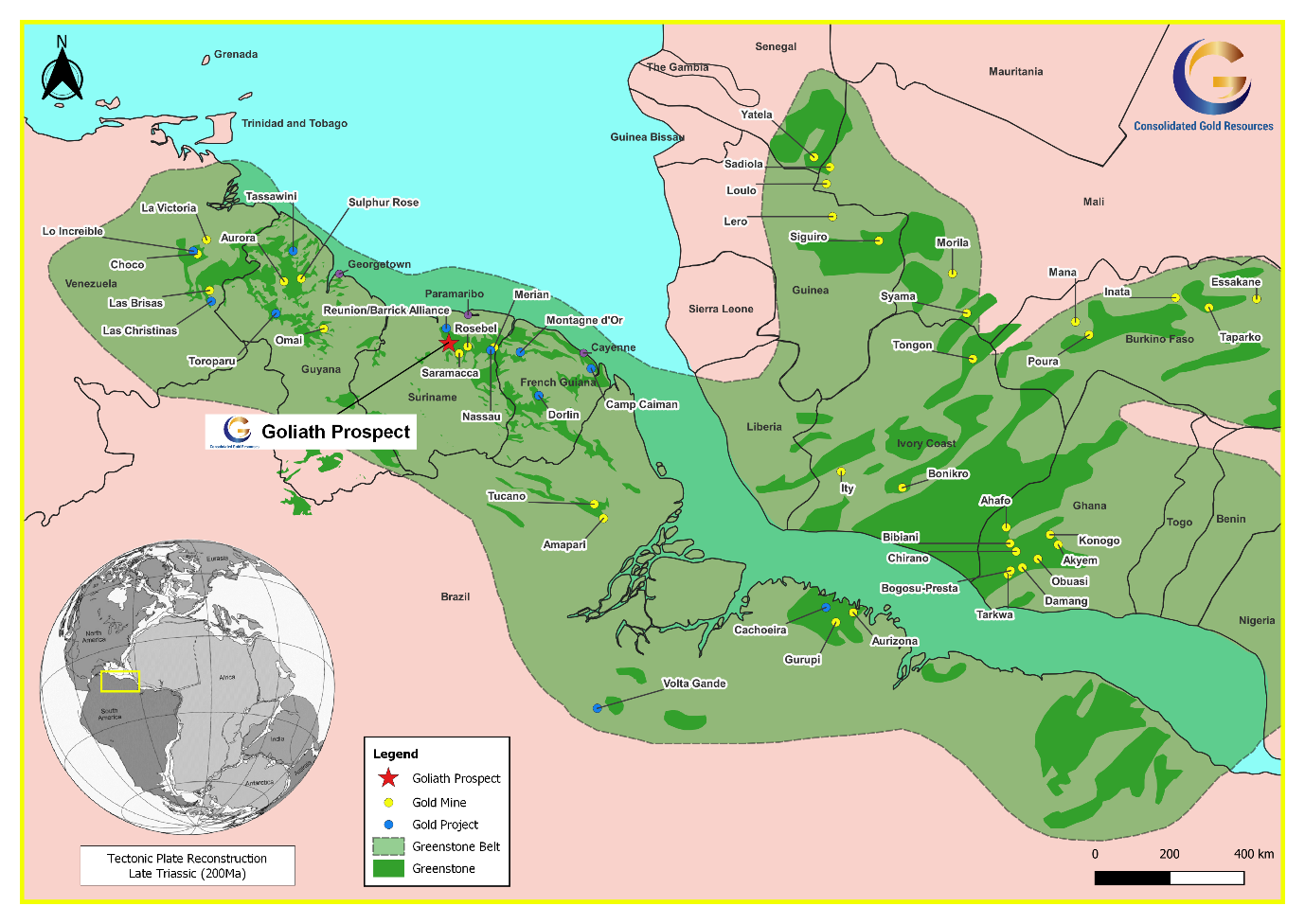 The Suriname geological map shows the NW Goliath Project is dominated by the Paramaka Formation of the Marowijne Supergroup, a greenstone belt which hosts several deposits in Suriname including the Saramacca and Rosebel deposits (Figure 5). 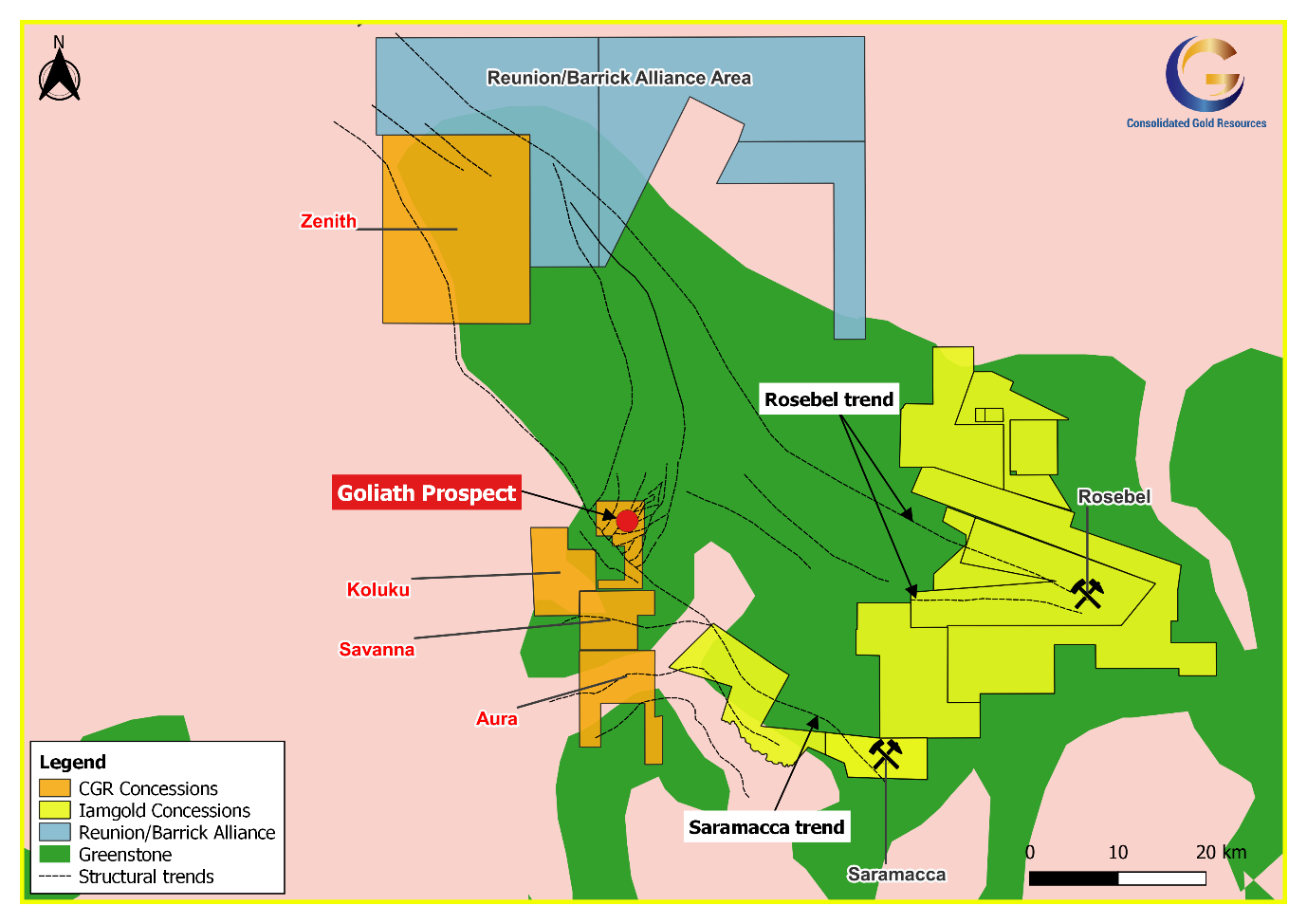 The Marowijne Supergroup comprises the Paramaka Formation (volcanic pile, basalts) and the Armina Formation (greywackes, mudstones). Mineralisation at the Saramacca deposit is associated with the Paramaka Formation and hosted within a series of NNW trending brittle-ductile sub-vertical fault zones at a contact between massive and pillowed basalts. Gold deposition is associated with boudinaged and folded hydrothermal veins and breccia zones with pyrite and minor arsenopyrite.

Prospect scale mapping and sampling at the Goliath Prospect has confirmed similarities to the alteration assemblages and mineralisation observed at these major deposits. The structural and lithological setting across the CGR concession package is considered favourable for gold mineralisation.

Previous exploration by Colossal has been focused on the Goliath Prospect and surrounds (Figure 5). Interpretation of detailed aerial magnetic and radiometric surveys completed by the company have revealed a NNE structural orientation associated with moderate to intense folding of the Paramaka Formation, this NNE trend is offset and crosscut by a series of NW structures which may be important controls on gold mineralisation (Figure 6).

The NNE trend is also reflected in the geology with a metavolcanic belt dominating the central parts of the project area. This metavolcanic belt is bound to the east and west by basin sediments. These lithological contacts are currently interpreted to be similar to the ‘belt-basin margin’ contacts of the Birimian in west Africa, which are considered highly prospective for economic gold mineralisation.

Several major NNE oriented reverse (thrust) faults occur either side of the metavolcanic belts and major terrane boundaries occur in the NW and SW of the concession area, where gneissic and felsic volcanic-intrusive sequences are interpreted, respectively. A discordant NW trending magnetic belt in the southwest may be a thrust emplaced mafic intrusive sequence.

Extensive historic artisanal mining has been observed across the project area, in particular the Goliath Prospect (Figures 7 and 8). The Goliath Pit located in the centre of the concession is a large saprolite pit measuring 250m by 200m and 50m depth (Figure 9).

The mineralisation is intrusive related and structurally controlled, hosted within a deformed and altered granite. Gold occurs within folded and sheared hydrothermal veins and zones of brecciation, with pyrite and arsenopyrite, much like the Saramacca deposit.

1 Note: All assays and grades from legacy drilling are considered indicative of potential mineralisation only. Laboratory reports and sample numbers have been sighted but not been subject to Awalé quality assurance and quality control measures. 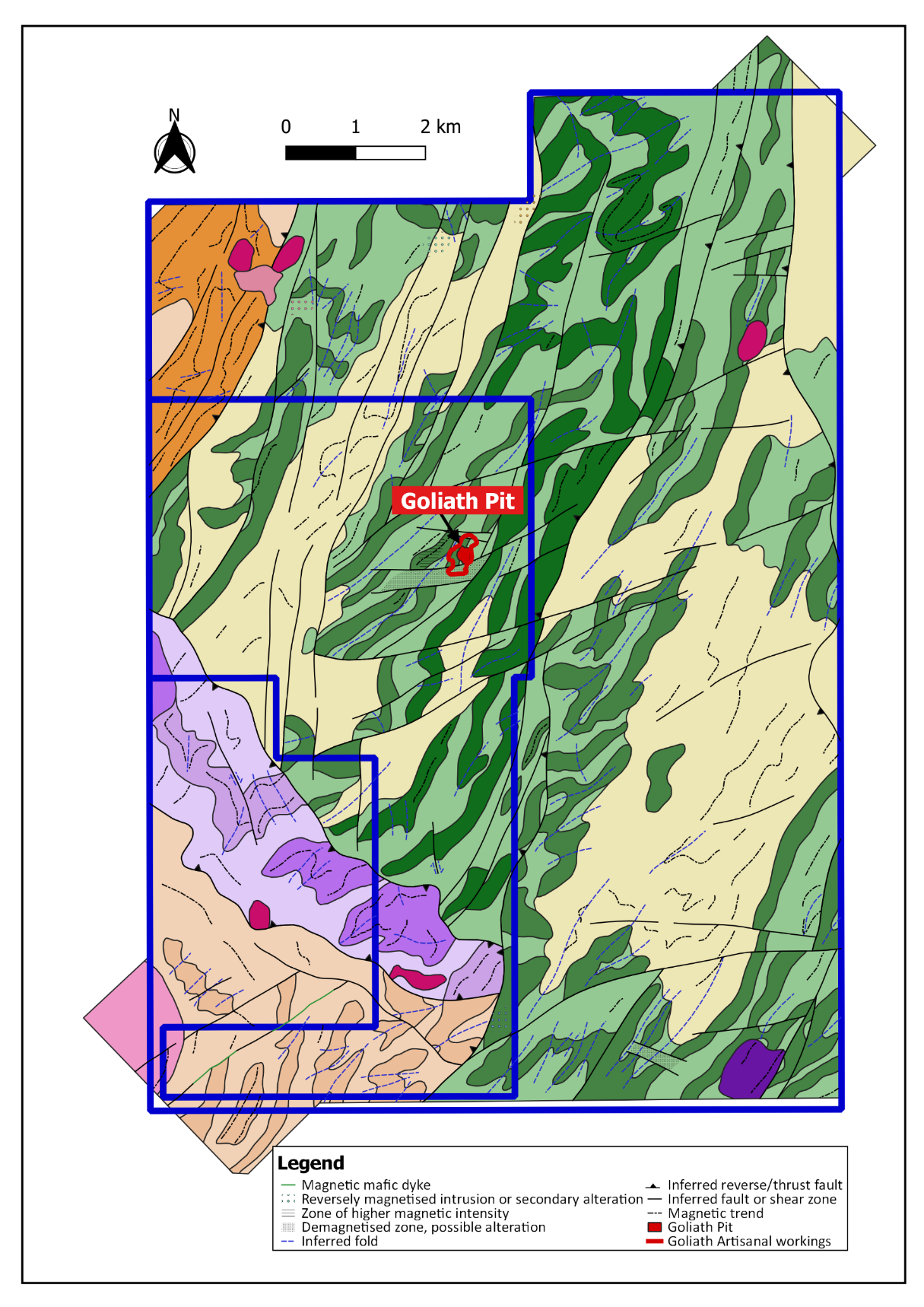 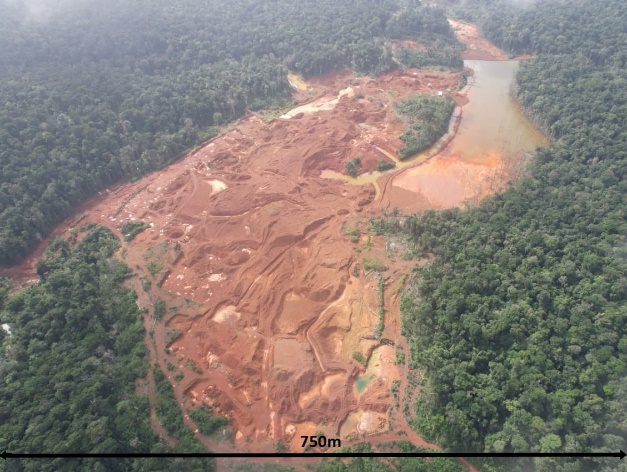 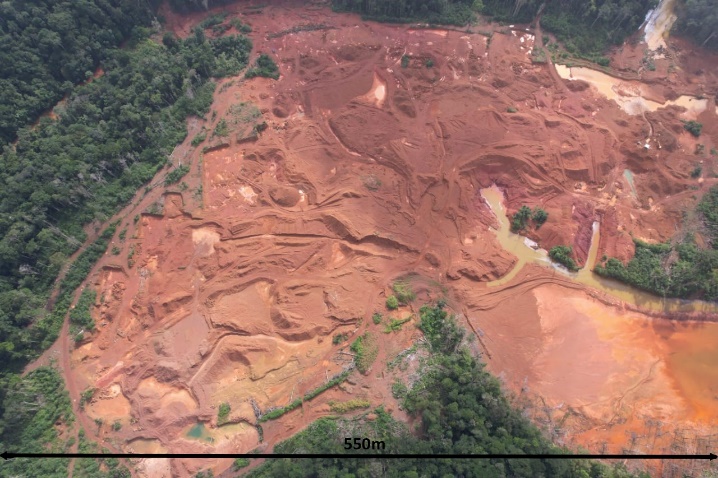 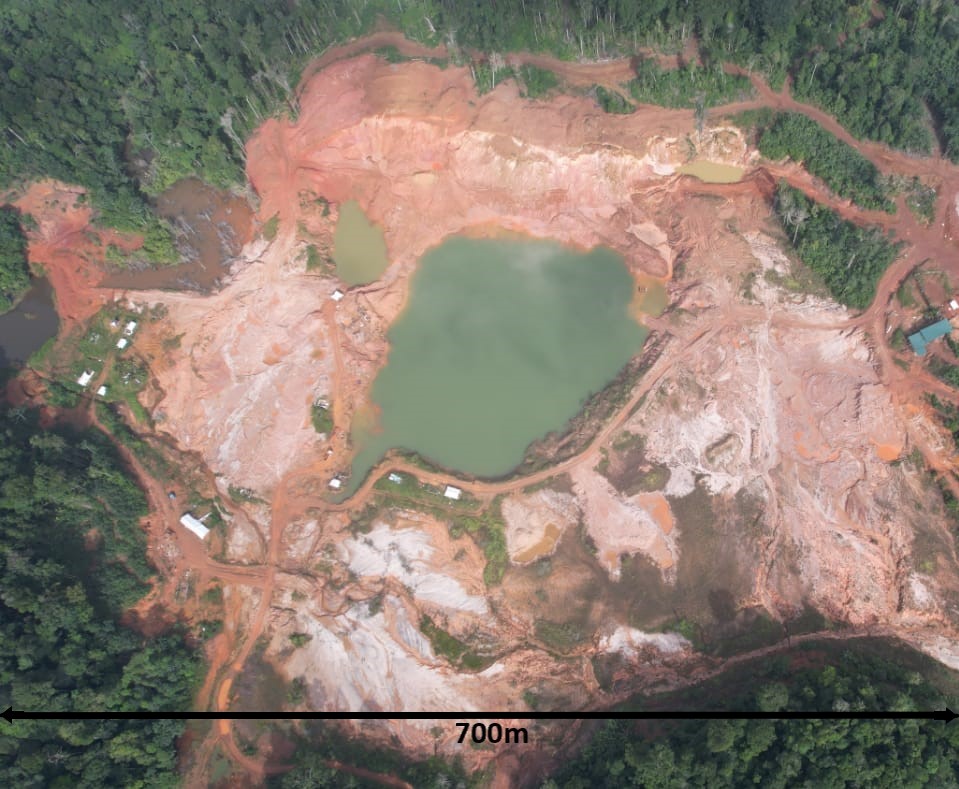 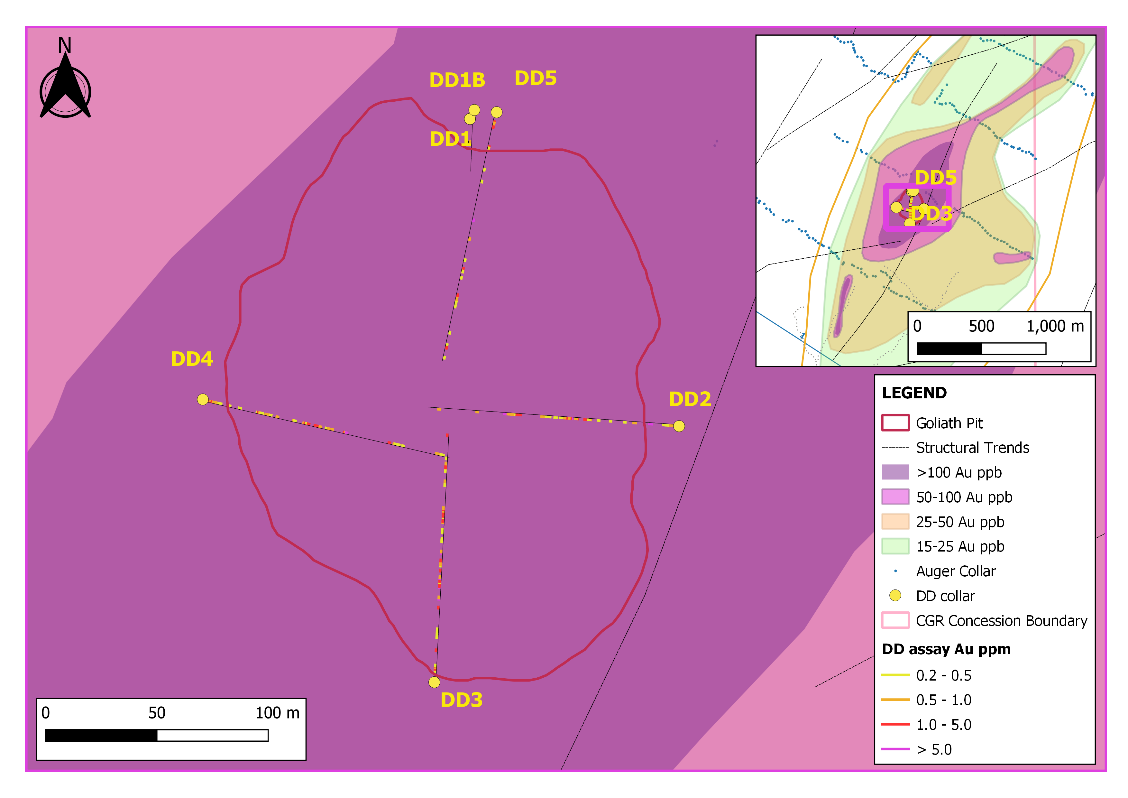 Figure 10: Plan view of scout drilling at the Goliath Pit

Figure 11: Section view of scout drilling at the Goliath Pit

In 2019-2020 a soil geochemistry program has shown gold anomalism continues south of the discovery area at the Goliath Pit. During the 2021-2022 season a 5000m (526 hole) deep auger drilling program successfully confirmed gold mineralisation in saprolite along strike of the discovery area. The broad spaced auger drill lines completed in this program have confirmed the mineralised trend extends to 8km strike and remains open to the NE and SW (Figure 12).

Colossal geologists have recently completed a watershed analysis for the concession package, and a stream sediment sampling program has been designed to generate new targets and vectors to the primary source of gold.

The Goliath prospect is home to multiple and extensive historic and active artisanal workings. The Goliath Berg is currently interpreted to be one potential source of  primary mineralisation, with many alluvial/colluvial artisanal workings having a vector toward its peak (Figure 13).The basin analysis and auger drilling completed shows that mineralisation is not restricted to the intrusive body at the Goliath Pit and gold in saprolite anomalies are evident up to 4km away from the intrusive body. These anomalies are hosted in metabasalts and metasediments and display similarities to the host rocks at the Saramacca deposit.

Auger drill programs will continue across the Goliath Berg and to the south (Figure 12) with the intention to extend the mineralised trends. Additionally, a 7,500 to 10,000m diamond drill program is planned to refine and prove the saprolite targets at depth and along strike. 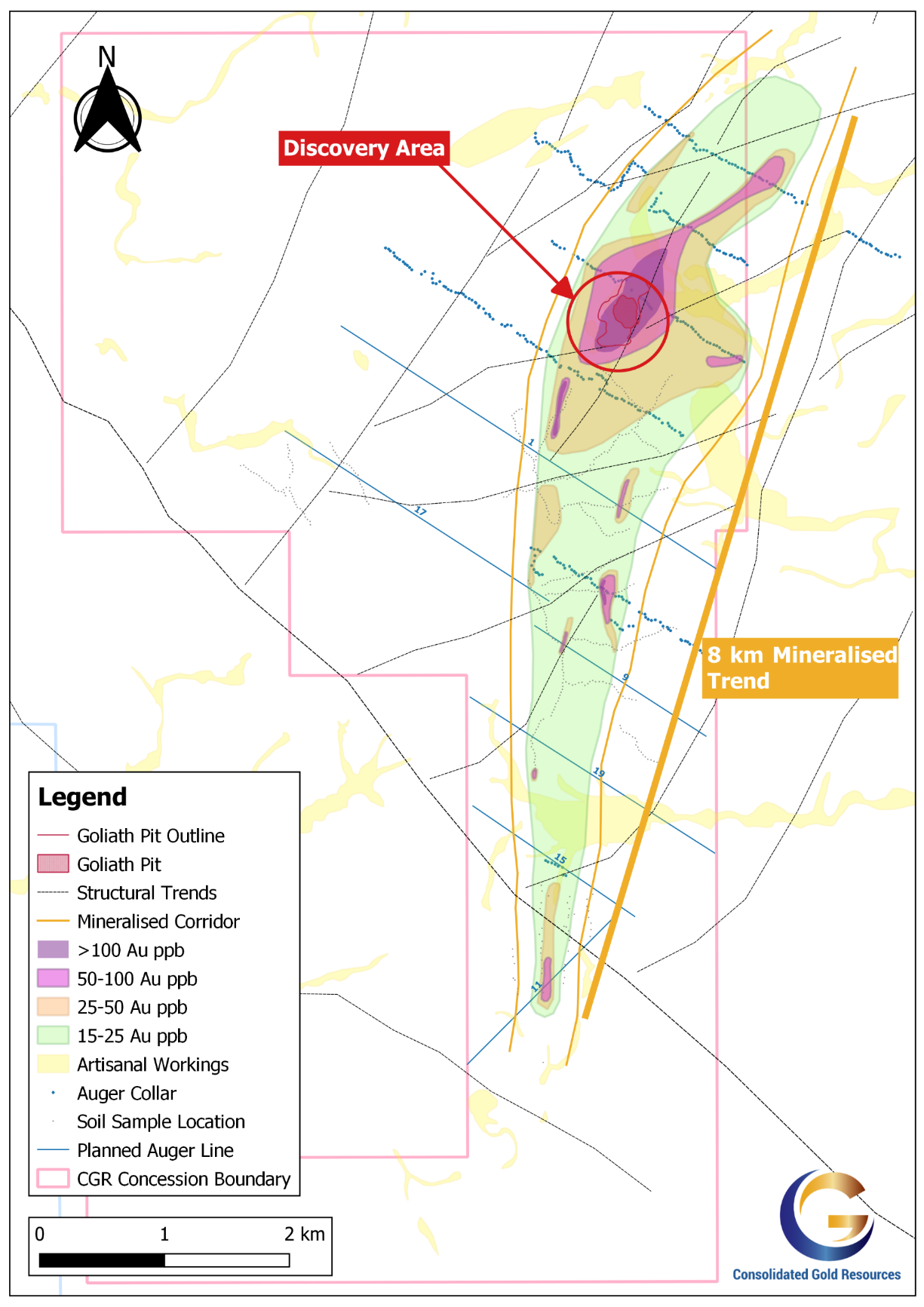 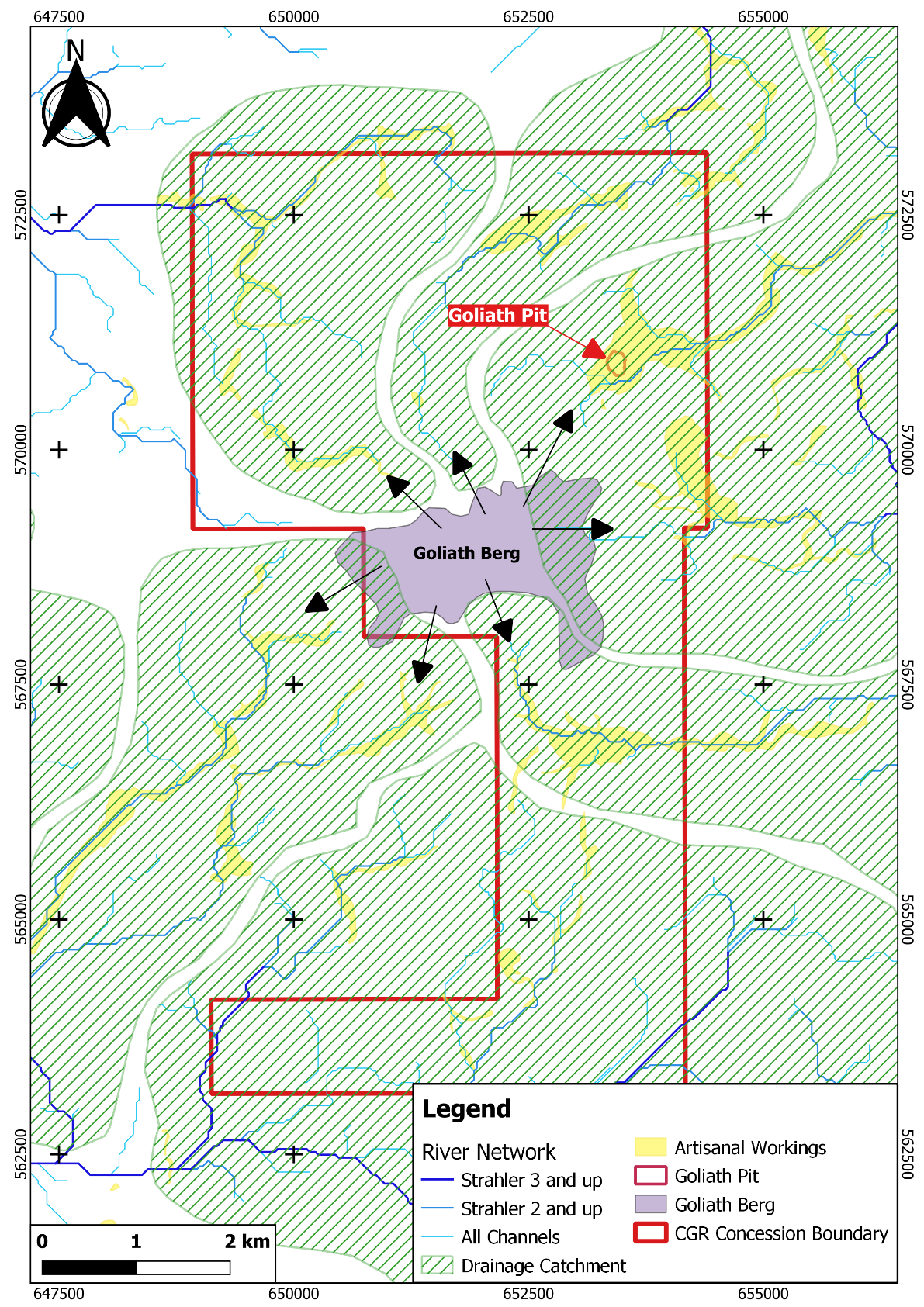